Construction sites, while necessary, are some of the biggest annoyances on the road. They’re dirty, noisy, and cause a lot of trouble. Cars can get backed up for miles because of some city project or another, triggering road rage in even the most temperate driver. There’s nothing to be done about it, shoganai. We just have to resign ourselves to this irritating fate.

Unless you live in Japan, in which case there’s actually something to look forward to with construction. In many Japanese cities they have character road guides and blocks. In most cases the characters are animals or famous things associated with the city. For example, I often see the deer character in my city and in the city of Kashima. Kashima city’s character is the deer (shika). The city’s soccer team is even called the Kashima Antlers and they have a deer mascot.

The two characters seen in the picture below were taken at a construction site just outside my apartment. The deer is obviously from Kashima, but the giraffe was a new one. I asked a teacher why the giraffe and she told me that unusual or really famous cute characters, such as Doraemon or Stitch, are used to tell people that it’s a school zone or that there are children around in the area and to be careful.

The giraffe on the right is to warn people “CHILDREN PLAY HERE.”

In Kamisu, there are dolphins and bunny characters. I only saw the dolphin character once in the three years I’ve been here, but I’ve seen the rabbits many times. The rabbits come in about three or four different colors. I’ve seen them in yellow, pink, and blue.

Pink bunnies at a construction site near Kamisu City Hall 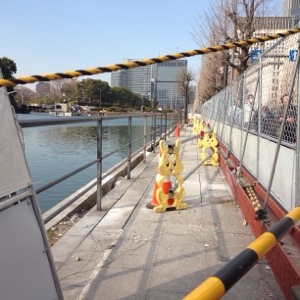 Yellow bunnies seen in Tokyo near the Emperor’s Palace

The idea behind them is to kind of soften the look of the ugliness that we often associate with construction. Instead of getting as upset as we normally would, the characters are there to distract from the stress of the situation and to make people think of adorable things instead.

Also, the bright colors are meant to alert people in either the day or night time to use caution on the road. The big eyes are meant to sort of shock you, because when people see the eyes at night they might think it’s a child or some kind of animal for a split second, and so hopefully drivers slow down around the work in progress.

However, some people in Japan want them removed because they’re too distracting and may actually cause accidents. The argument they put forth is that these characters make it harder for drivers to just concentrate on the road and instead get their eyes fixed to the cute bunny or deer instead. And so then, the distracted drivers won’t be able to react to a situation going on in front of them.

Personally I love them. They do make the long stretches of stop and go traffic in the midst of construction more bearable in my mind, so I hope Japan decides to keep them. I hope to see more of them soon!