My friends and family would probably be the first to tell you I’m actually not so big on birthdays. Today, for example, I’m spending my 23rd birthday more-or-less alone. The year before, I don’t quite remember what I did, but I think it involved just going out to dinner with some friends and eating cake.

It’s not that I don’t like parties or celebrations. I actually love a good party! I’m just not very good at planning them. I also don’t really feel all that inclined to make a big deal out of turning another year older.

This year, I think I want to try something different. In Lewis Carroll’s Through the Looking Glass there is a rather interesting holiday that I love. It’s called the “un-birthday” in which a person celebrates any day that is not their birthday. You only get one birthday per year, but you can have 364 un-birthdays.

And so, on my birthday, I want to wish everyone in my life a very, merry un-birthday! Thank you for being a part of my life, and for making all 23 years an epic adventure. Please, eat cake and be happy! I love all of you!

Seriously, how has this not caught on? It’s a great idea!

It’s funny how things worked out. Not long after I wrote this little tidbit, my friends and I made some plans to do an “Un-Birthday Party!” which included a trip to an Alice Cafe in Ginza, Tokyo. The restaurant was actually pretty amazing! Completely covered from floor to ceiling in Wonderland things.

How neat is that?

My friends and I at the booth

And the day after that, I went to the Biohazard Cafe (aka Resident Evil Cafe) with my friend Marcos. Honestly, between the two, Biohazard Cafe won for having an epic performance. At one point during our meal, the waitresses prepared for battle, grabbing “guns” off the wall that I thought were just there for decoration and “shot” at this monster inside a large plastic container. The sounds effects were loud with monster roars and “gunfire.” 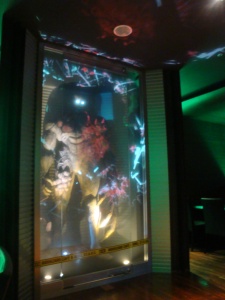 The monster the ladies shot at with the toy guns

The ladies shooting at the monster

Afterwards the customers, such as Marcos and myself, could take pictures with the monster and strike a pose using the guns.

All in all, it turned out to be a very cool belated birthday party. Yay!